If you have already tried to install "SimCity 4" or "SimCity 4 Deluxe Edition" on Windows 8, you had to realize that the installation went well but against the game refused to start. Given the solution we found, this is due to the fact that processors now consist of multiple cores (Dual Core ,Quad Core, ...).
If you use the troubleshooting utility program compatibility, it will eventually tell you that the program is compatible with Windows 8. However, following this tutorial you will see Electronic Arts had planned a small option backward compatibility of his game

IMPORTANT :
- Apparently, the solution described in this tutorial doesn't work on all computers (with Windows 8). The tutorial was made in a VMware Workstation virtual machine and the game (version box : 2CDs) worked without problems.
However, depending on the hardware of your computer, it's possible that the game doesn't work.
If you own this game, try this solution, otherwise don't take the risk.
- To end this warning, know that the game works fine in a "Windows XP SP3" virtual machine created with VMware Workstation 10.0.3 (the latest version in September 2014). The flashing of the game screen can be fixed by setting the render mode to "Software". To do this, go to the end of the tutorial.

We then tested the normal version of the game and the Deluxe on previous versions of Windows, and it turns out that Windows XP SP3, Windows Vista SP1 and Windows 7 (32 and 64 Bit), this game still runs correctly no changes necessary.

For Windows 8, here is the solution for SimCity 4 and SimCity 4 Deluxe Edition :
Start by installing normally SymCity 4. 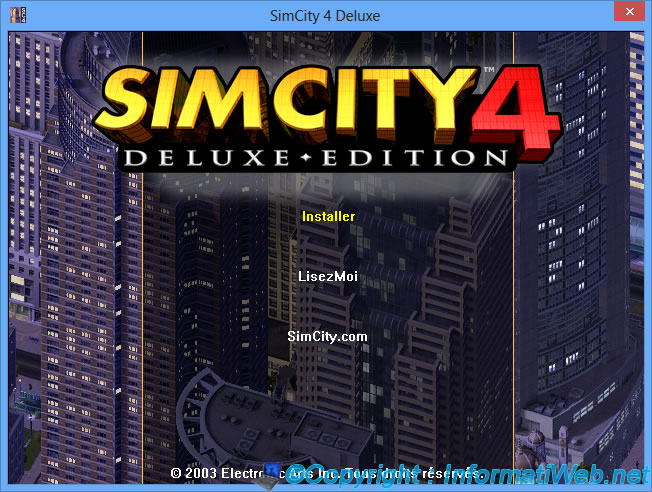 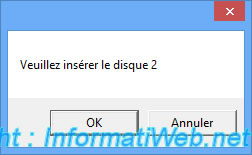 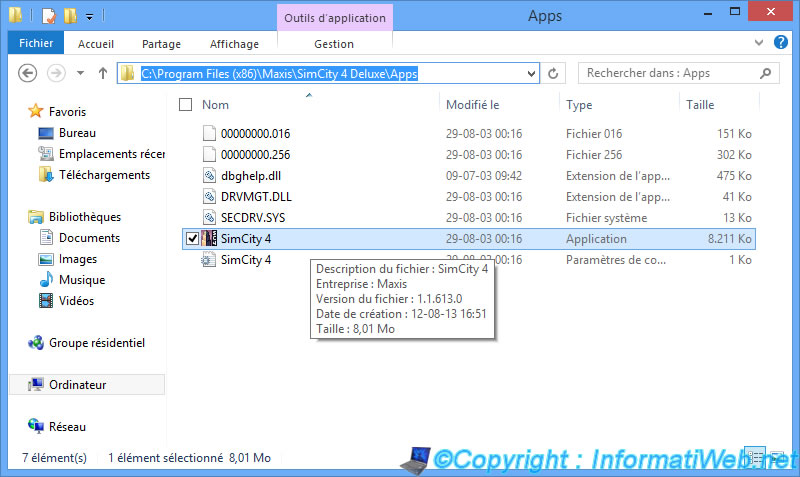 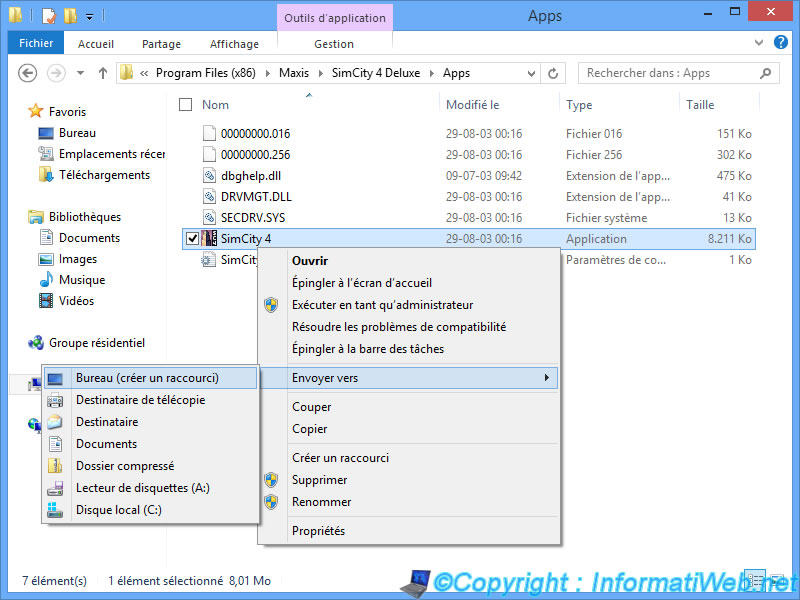 Then right click -> Properties on the shortcut has been added to your desktop. 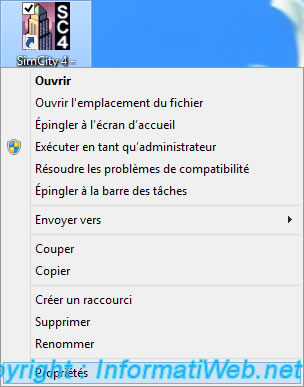 These parameters are :
- Start the game in window with resolution 800x600 (given in the game)
- Forcing the game to run on a single processor (one heart) for the game to work. 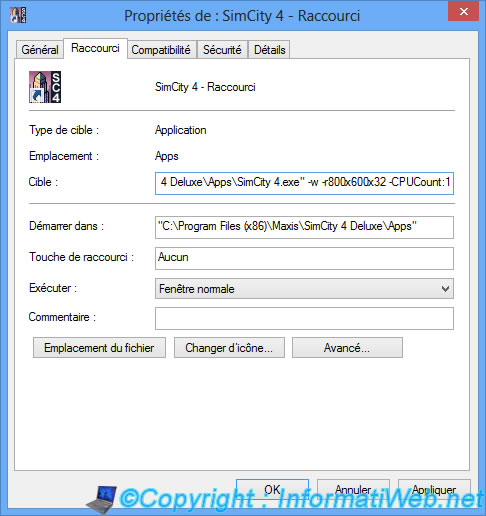 Double click on the shortcut you just modified, and magic the game starts.
The intro appears. To remove, you can add the following parameter :
-intro:off 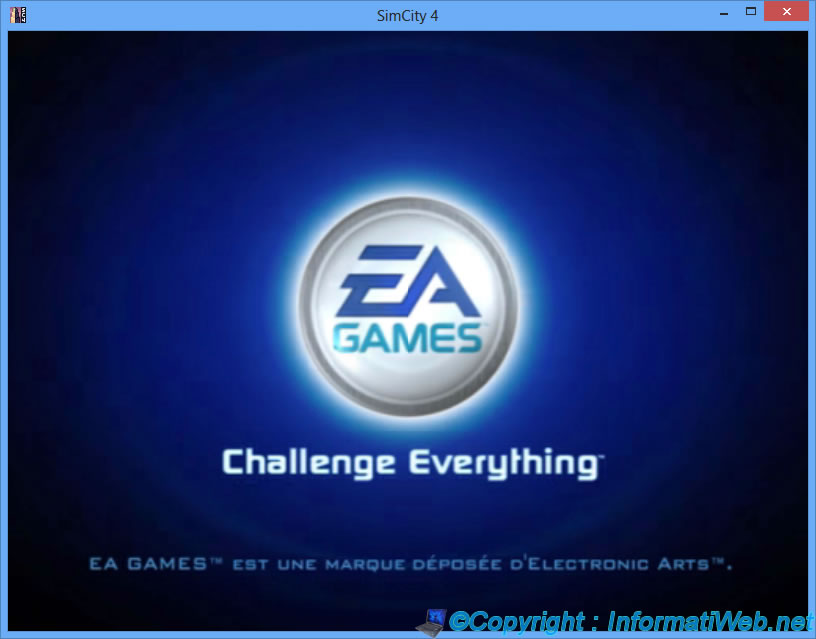 The game will appear. 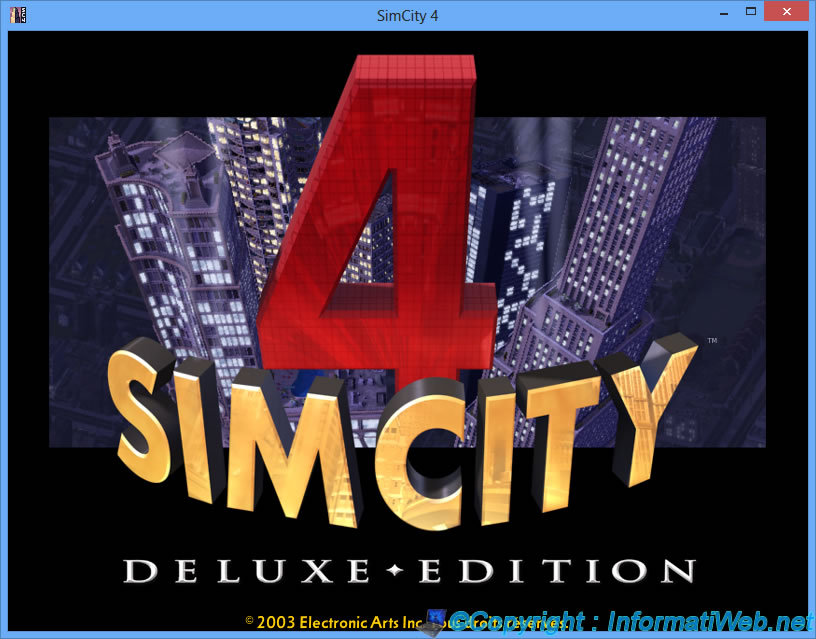 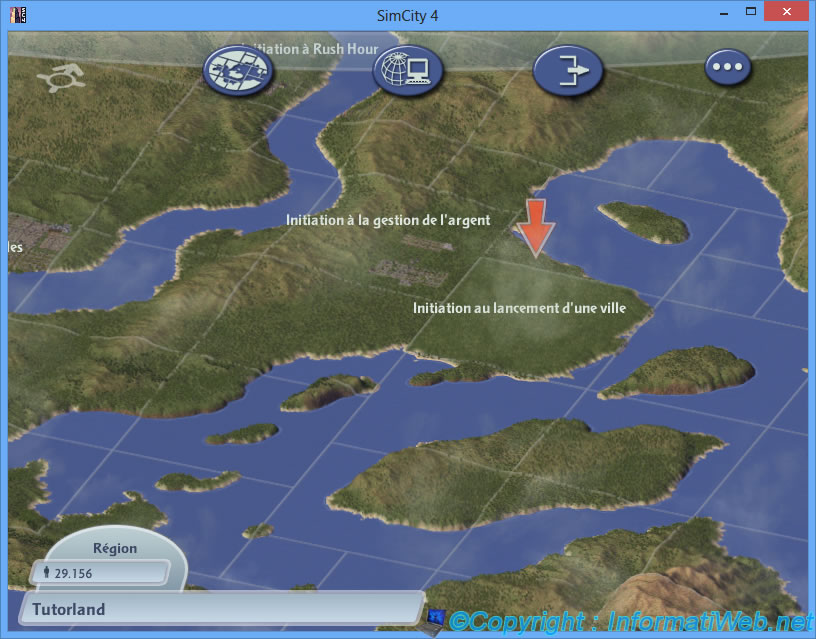 Apparently, Windows 8, it is impossible to run this old game in full screen.
Nevertheless, we found a way to engage in a custom resolution that is larger than the original.

To do this, use the "CustomResolution" parameter instead of "w" (for windows). This gives a resolution of 1680x1050 :

32 means that the game will starts with 32-bit color mode. 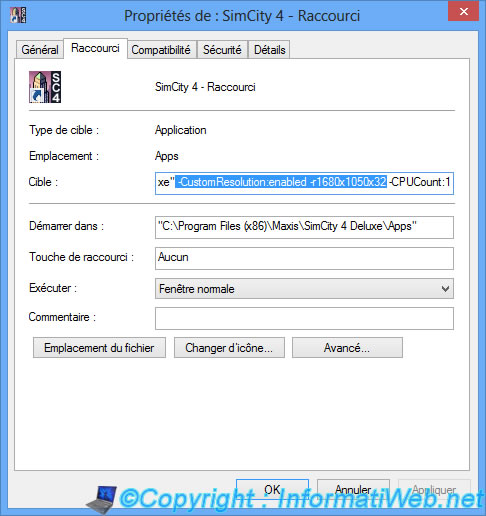 Because the game starts in windowed mode, it is possible that the taskbar through the window before the game, therefore we propose to automatically hide your taskbar.

To see the image below for full size, click here. 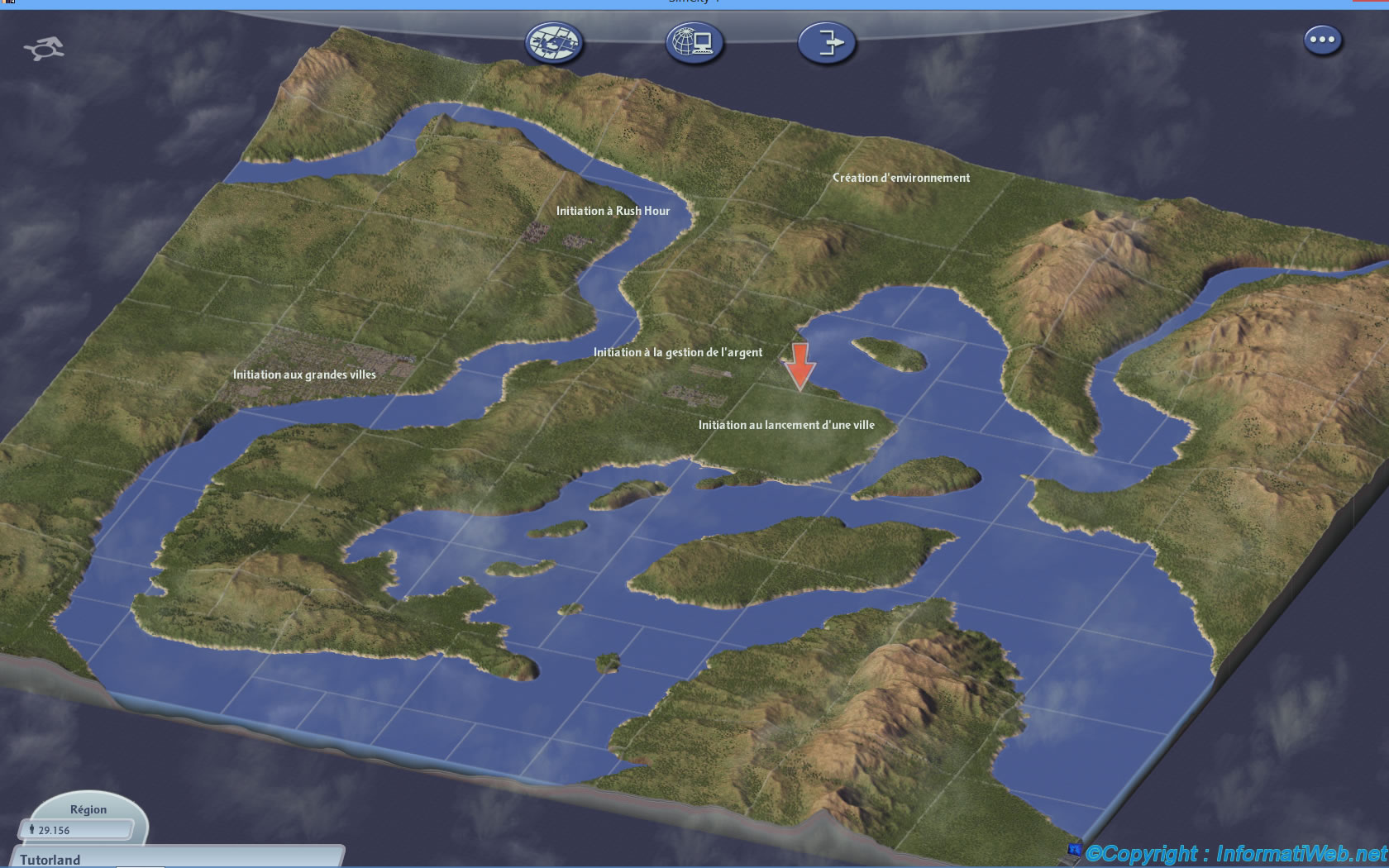 On some computers, the game starts but the game screen flashes, making the game totally unplayable. This problem is due to a compatibility issue with the latest graphics cards.
However, to solve this problem, just change the render mode of the game, to "Software".
To do this, click the "..." button at the top right and then click the screen icon (outlined in red in the image) and then select "Rendering : Software".
Finally, click on "Accept" and restart the game. Flickering problem has disappeared. 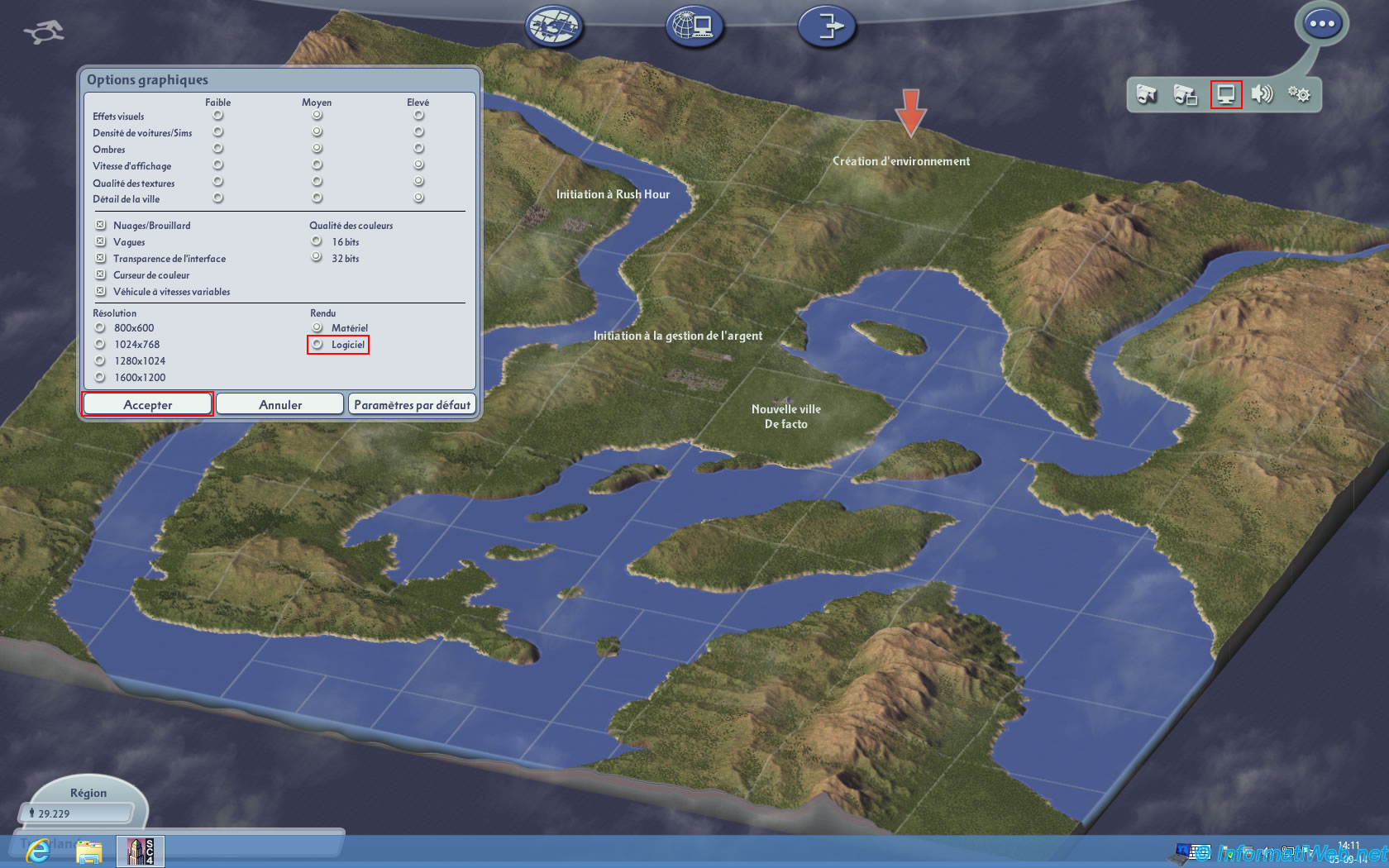 SimCity 4 provided settings for :
- Start the game window (in the desired resolution)
- Run the game in a custom resolution (not proposed by default in the game)
- Automatically disable introduction (EA Games ...)
- Turn off the music and / or sounds of the game

To start the game with the settings, you will inevitably create a shortcut to the "SimCity 4.exe" file.

Then right click -> Properties on the shortcut has been added to your desktop.

In the first box (named : Target), you can add the parameters (leaving a space before each time).

Here are the parameters :