Most motherboards "mid-range" or "high range" sold currently, include a RAID controller. Depending on the motherboard that you buy, you can create different types of RAID.
For those who do not know it, a RAID allows you to use multiple hard disks to increase: security (prevents loss of data in case of a hard disk crash), performance (by writing some data on a hard drive and the other on other hard drives), or both (security and performance).

In general, you can use one of these RAID levels :

Before you begin, you must configure the hard disk controller in the BIOS of your motherboard. By default, this controller is set to "IDE" (for older computers) or "AHCI" (for new computers). To use the RAID technology of your motherboard, you must set it to RAID.
Warning : If you switch from IDE to RAID, Windows certainly show you a blue screen STOP at startup. The only solution is to reinstall Windows after the change of controller. If you switch from AHCI to RAID, this shouldn't be a problem.

If necessary, refer to our tutorial : Change the mode of the hard disk controller

Once the controller is configured to "RAID", restart the computer. Upon restart, you'll have an "Intel Rapid Storage Technology" screen that will appear with a black background.
As indicated on the screen, hold down the CTRL + I (this is an "i" uppercase).

A screen like this will appear. Select "1. Create RAID Volume" and press "Enter". 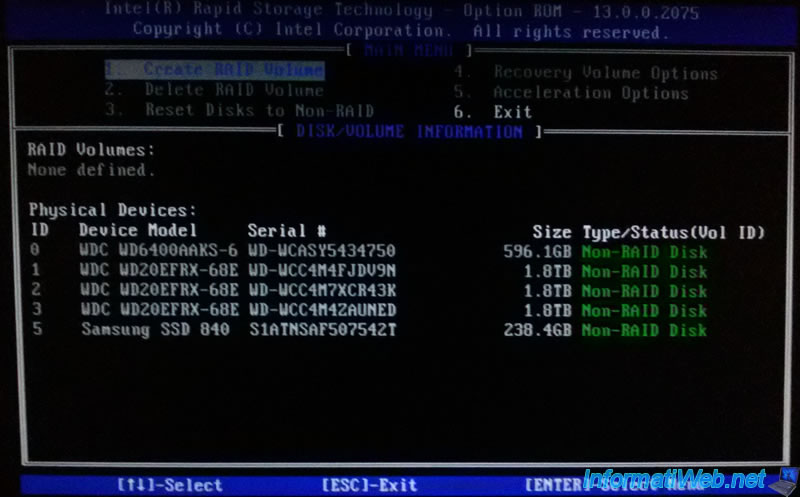 Specify a name for this volume, move on "Select Disks" and press "Enter". 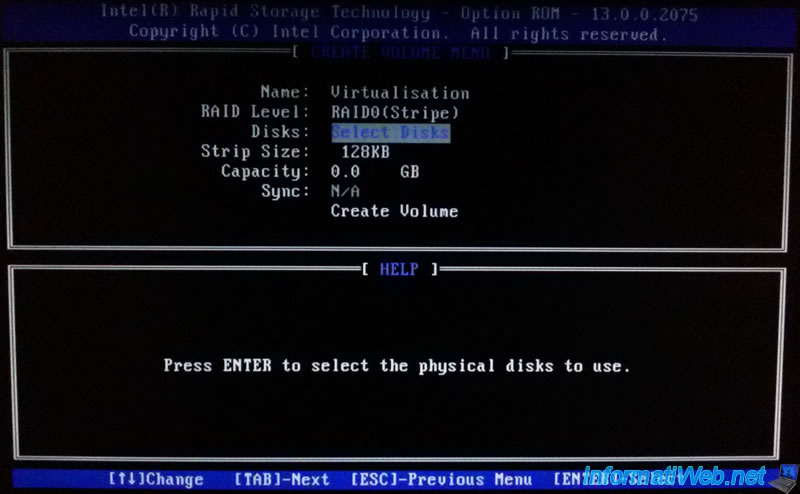 Select hard drives to use for the RAID volume by pressing the space bar.

In our case, we will create a RAID 5 (allowing us to combine performance and security). So, we select 3 hard drives.
Press "Enter" to confirm your choice.

Select the RAID level that you want to use. 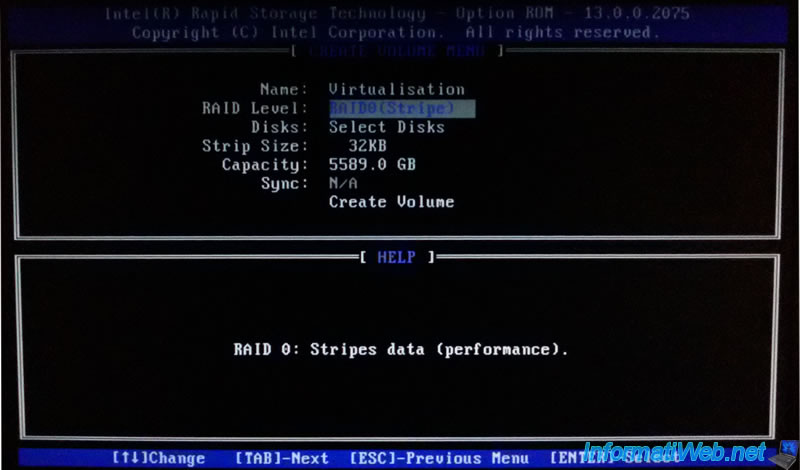 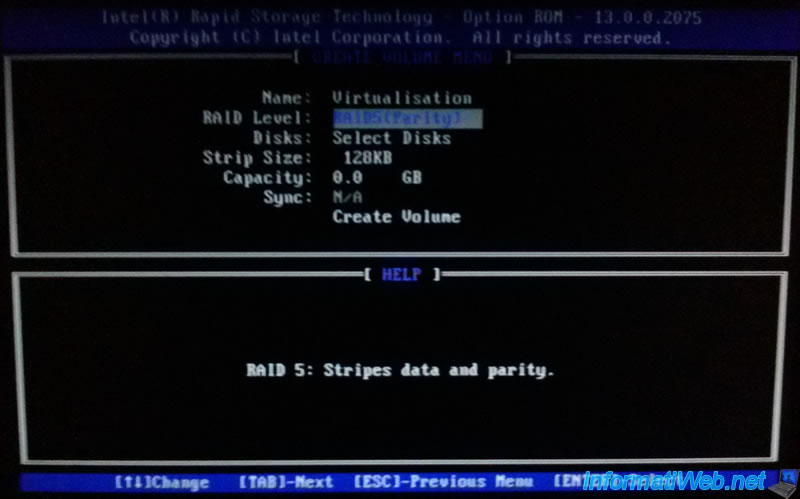 Create the volume by pressing Enter. 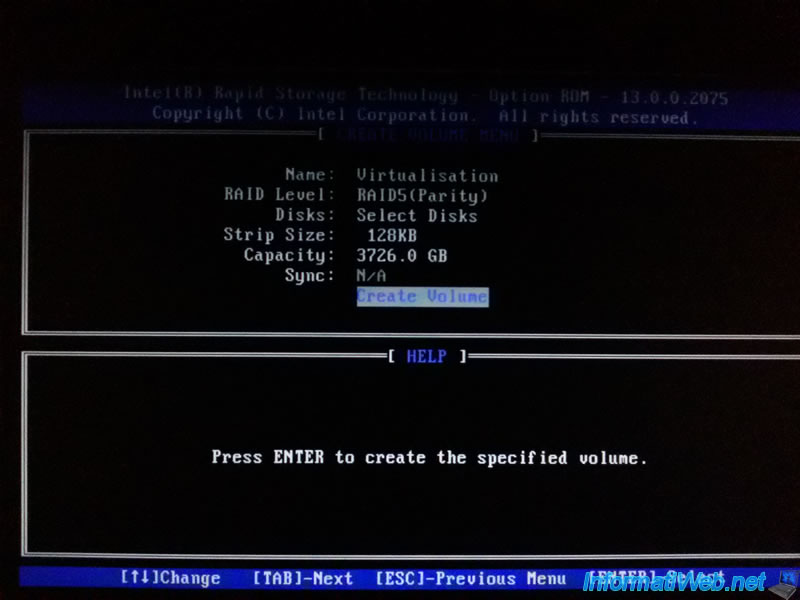 The wizard warns you that data on the selected drives will be lost. Press "Y". 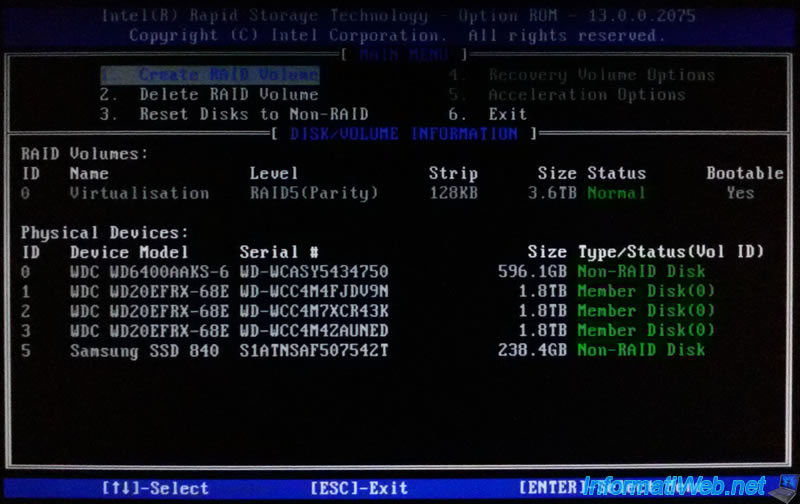 To initialize a RAID volume, use the "Intel Rapid Storage Technology Driver software" program available on the driver CD or on the motherboard manufacturer's website.
Once the program is installed, go to "Manage" and click "Initialize". 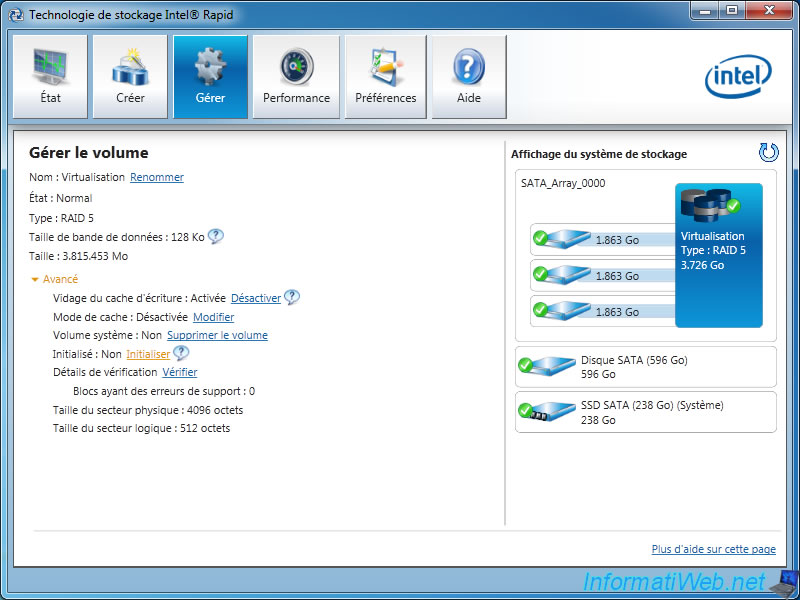 Click "Yes".
Warning : This process takes time (even a long time). It depends on your computer performance and the number of hard drives associated with this RAID volume.

icon of Intel Rapid Storage ... will be like this :

.
Once initialized, the line "Initialized" will be "Yes". 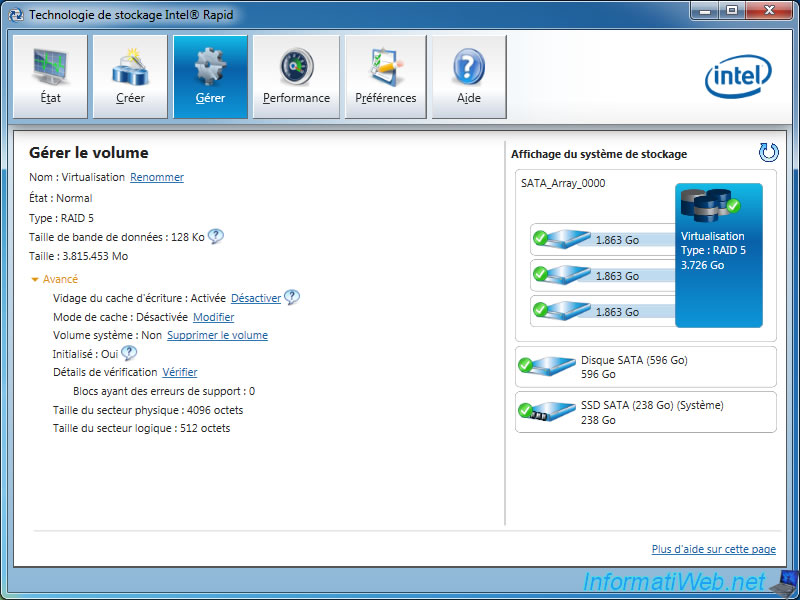 Since the RAID is created at the motherboard level (hardware RAID controller even if it doesn't offer the same advantages that a true hardware RAID), Windows sees only one hard drive (which doesn't really exist). In reality, this hard drive (that we had partitioned into 2 partitions for our needs) is our RAID volume containing 3 hard drives. 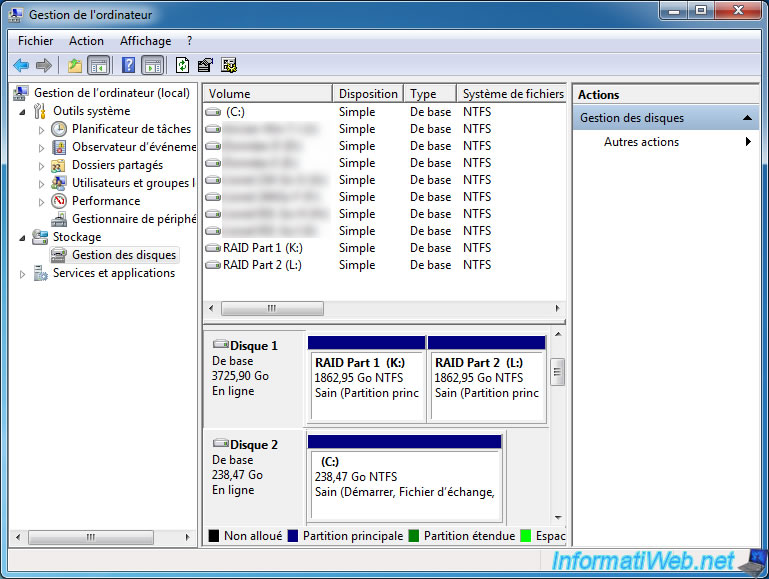 To prove that Windows sees the RAID volume and not real hard drives used for the RAID volume, here is a screen printing of hardware seen by Windows.
As you can see, Windows sees the volume "Intel RAID 5 Volume SCSI Disk Device" but he doesn't see the 3 Western Digital hard drives that compose it.
Note : To access this window, right-click on a partition of the workstation (or computer) -> Properties -> tab "Hardware". 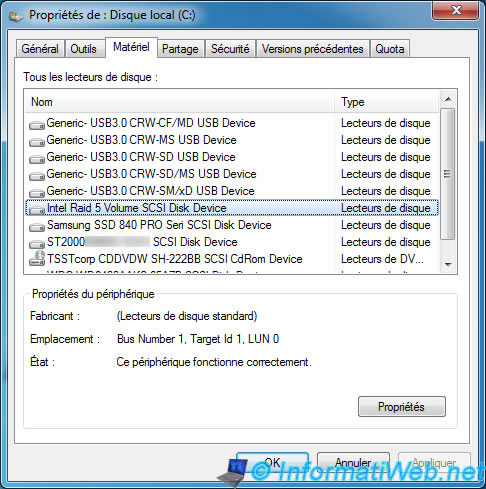 Now, our RAID is ready to use. 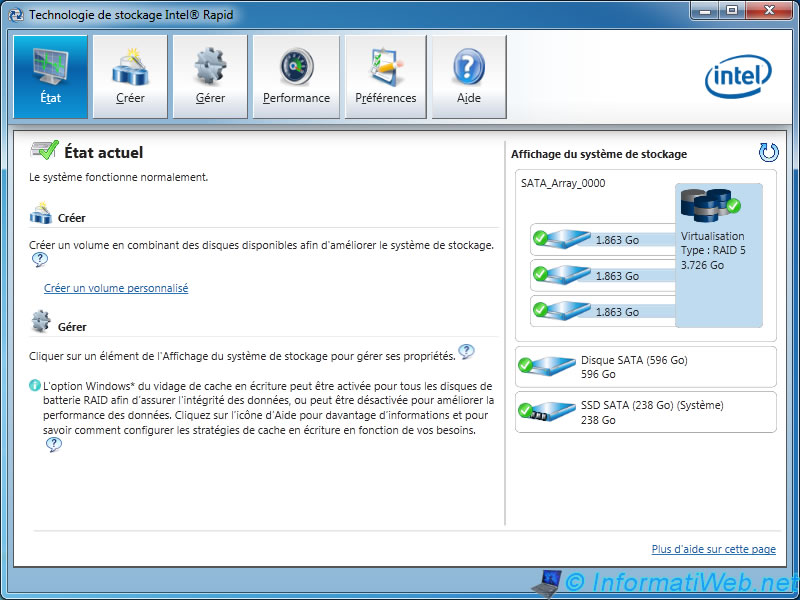 4. Check and repair in case of problems

Now, what is happening in case of problems ?
Whether it's a hardware issue or a Windows crash, the RAID controller detects a problem on your RAID volume at computer startup. If you open the Intel program, you will see the line "RAID Volume Name : Check and repair ...". 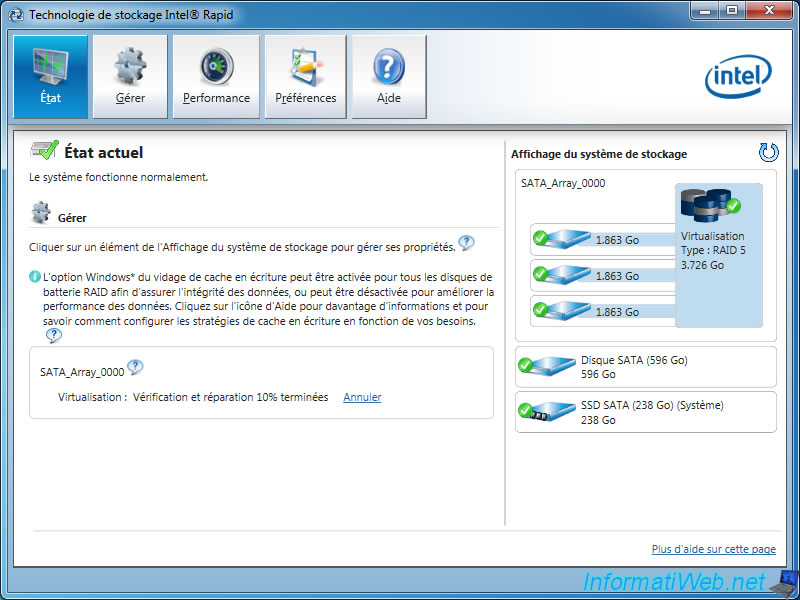 In the "Manage" tab, you will see the number of errors founded and corrected. This is possible due to the parity of the third hard drive. In the case of a RAID 0, you will lose data.
As you can see, the state is "Check and repair ...". 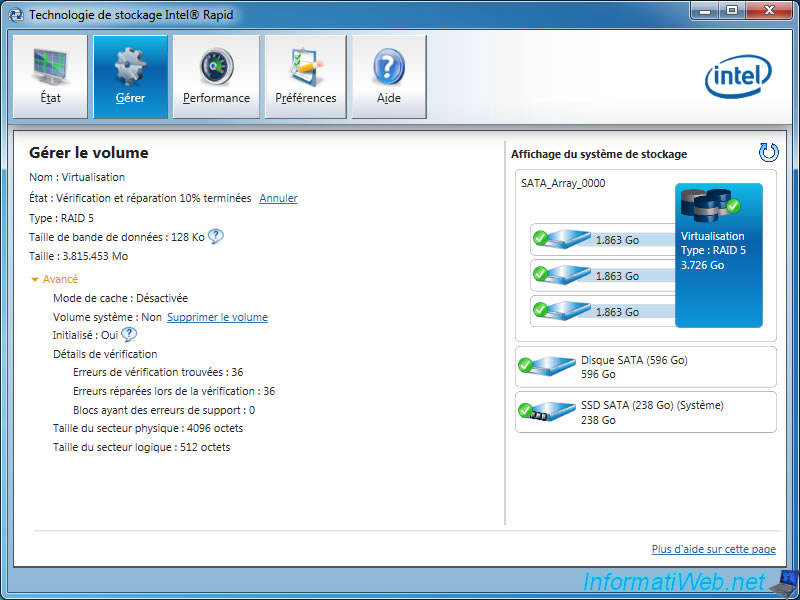 When the repair is completed, the state will return to "Normal". 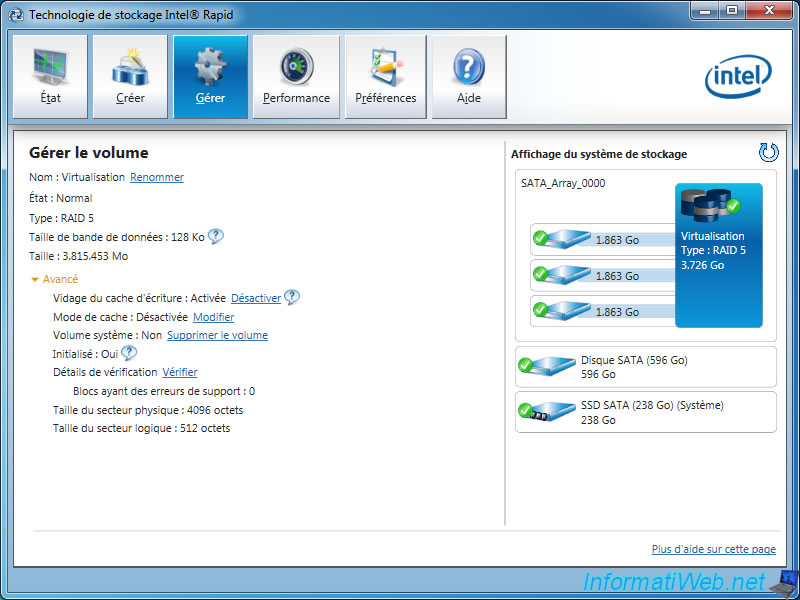