For several years the Wifi has appeared more and more people use it to access the Internet without having to connect a network cable (RJ45) on their computer.
WiFi is a technology that allows you to connect to a (usually integrated in the new routers or Box) wifi access point which is connected to a modem or router that has internet. 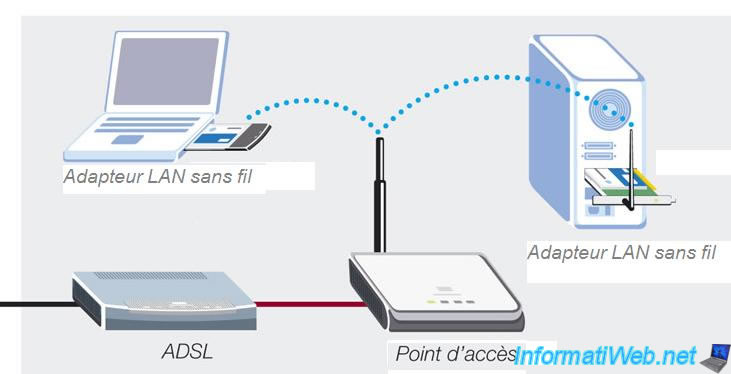 The problem with this new technology is that too many people neglect the fact to secure their wifi connection.

Here's what happens when you do not secure your wireless connection :

We'll explain how to secure your wireless network to avoid these intrusions.

Having a wireless network is good, but since many people have, interference may occur if you use the same frequency as them.
Here is a software to know what channel select : inSSIDer (Office).

In our case, only one wireless network is located in the corner. It is actually ours. But if it was not so we could avoid the channels 1, 2 and 3.
Why? Well simply because, as you stated in the program as a graph below, the wireless network extends a little on the higher and lower frequencies.
It is therefore possible to avoid using the same channel as another and avoid using the channel next to another network (if possible).

In this case, the Wifi "InformatiWeb-Wifi" network is configured to display its name. 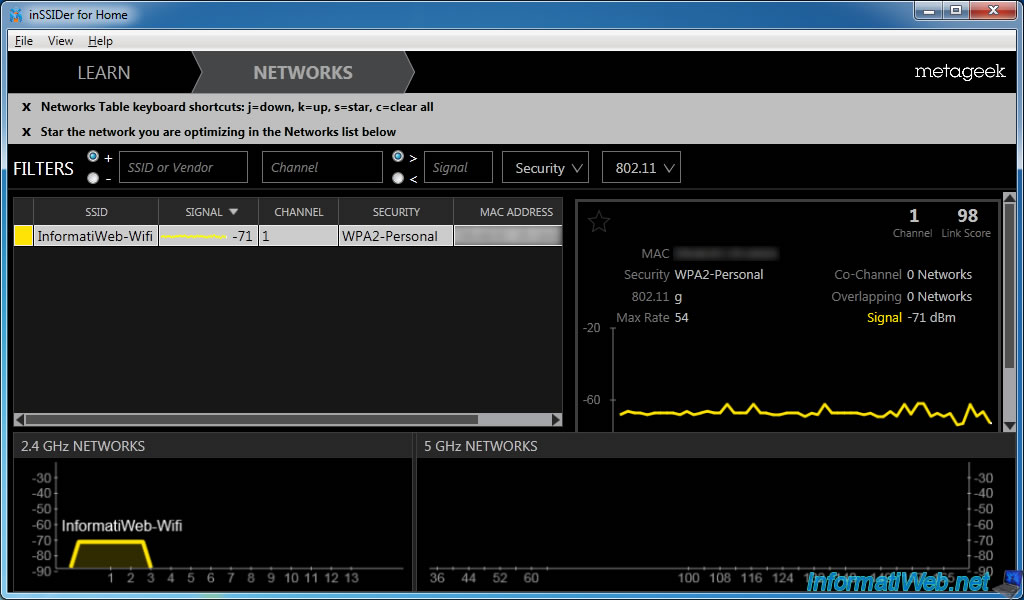 While in the other case, the name is not "distributed" and therefore is not displayed. Some devices will not see the network and others will see a wifi access point is in the area but will not display the name because it is unknown.
In 2 cases, you will be unable to log in to it without the name (SSID) of the network and its security key (WEP, WPA, ...). 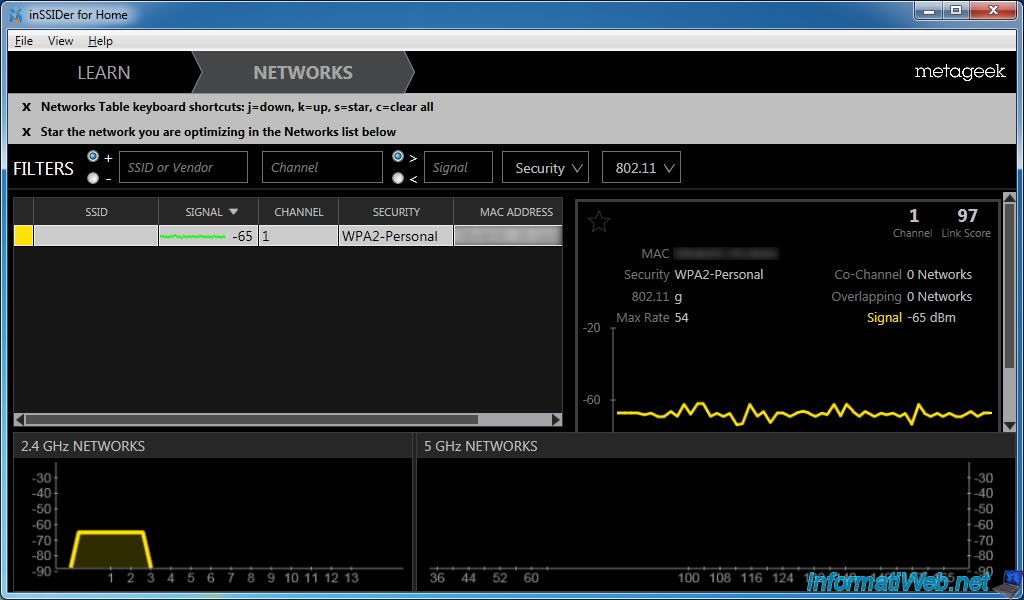 As a general rule, it's in the router (or Box) as explained earlier in this tutorial.
Because all WiFi access points, routers and modems are not the same, we can not explain the procedure for all models that exist.
However, we will explain what is meant by this or that option ...

To enter the interface of your router, you need to know its IP address. This address is called "IP address of the gateway" or "default gateway".
To know, follow our tutorial "Know your LAN IP address" and read the item on your version of Windows.

Once in the interface of your router (or access point), look for a option called : Wireless, Wi-Fi or WLAN.

Note : We have made this tutorial on the router "Sagem Fast 3464 (Scarlet Box)". 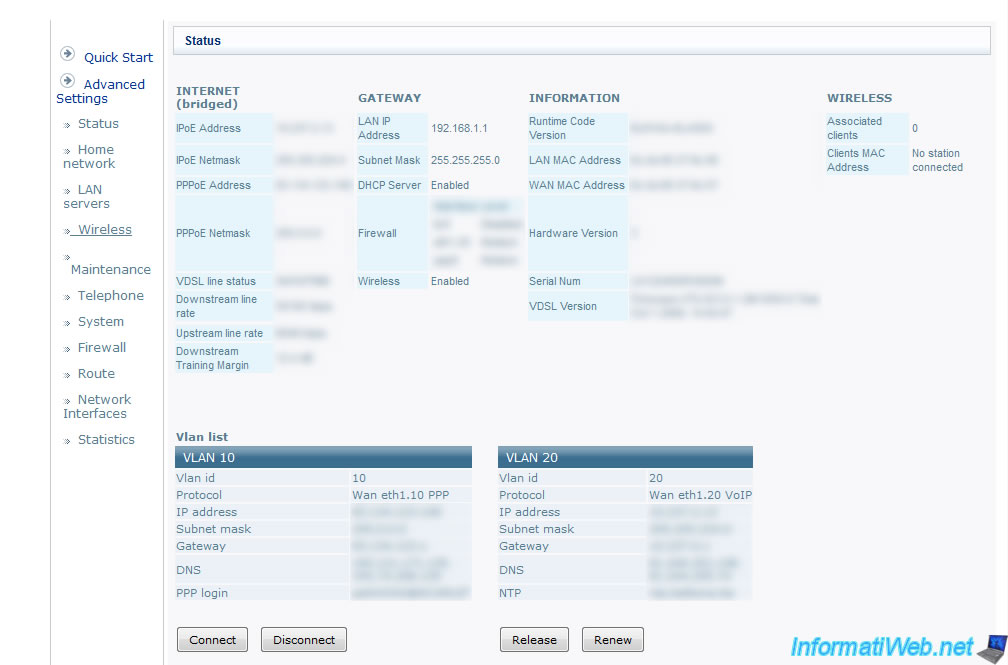 Once in the configuration of wireless network, you will find a button to enable or disable the wireless and various options and information network :
- MAC Address (Mac address in English) : The physical address of your Wireless Access Point. (So that is a logical IP address)
- SSID (Service Set Identifier) ​​: Name of the wireless network.
This is the name that will be displayed by Windows, Android, iOS, ... when you search for wireless networks available nearby.
- SSID Broadcast : To distribute or not, the name of the wireless network.
Uncheck require you to manually specify the name and the key at the first connection but avoid that malicious people can not see your wireless network and try to connect.
- Channel (English Channel) : Channel your WiFi access point should use.
See point 1 of this tutorial to avoid interference
- Security (Security) : Security type to use.
Various safety devices exist :

The choice of this security depends on the compatibility of your devices. Obviously try to use the latest security provided by your access point while remaining compatible with all your devices.

- WPA type : Allows you to use a passphrase (letters A to Z) or hexadecimal key (numbers 0-9 and letters A to F).
- Passphrase or Key : The security key that will be required to connect to the wireless network.
- Encryption : The type of encryption.

A feature called "WPS" is available on some wireless access points.
This is a function to accept the connection of a device : 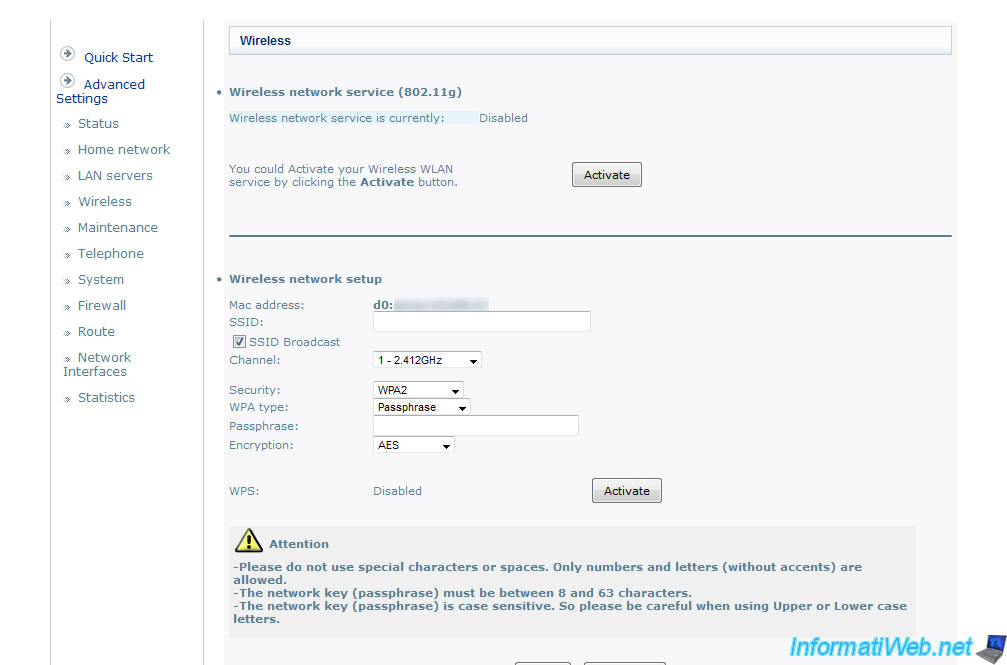 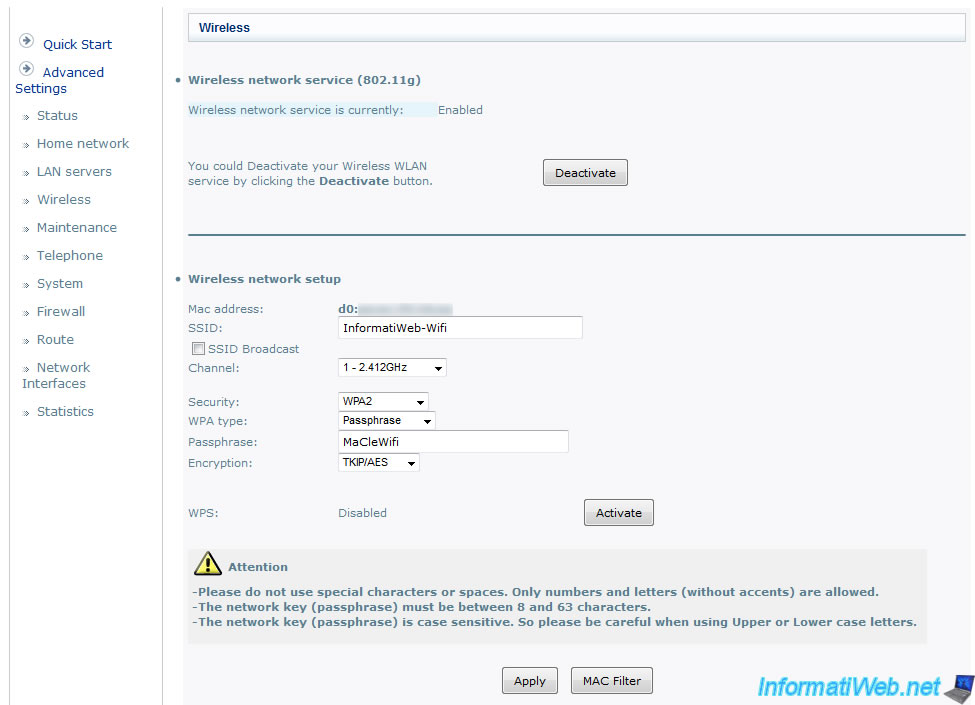 As indicated above, a MAC address is a physical address that is unique per device.
Even if you buy 2 wireless network cards from the same manufacturer and the same model, they will have different MAC addresses.

We can therefore add the filter to better secure our wireless network. To do this, click the "MAC Filter" button.

Notes :
- This option is not available in all routers or wireless access points
- Keep in mind that it is possible, in software, to change it. The MAC address that the router will therefore be false but the device (NIC) still retain its physical address assigned by the manufacturer.

Select the filter mode :
- Allow (Allow) : Used to allow only a list of devices
- Deny (deny) : To allow all devices except those listed.

To know the MAC address of your device :
- Look in the wireless options on your router or access point
- Within the parameters of your network connection
Note : The MAC address is in the format : xx:xx:xx:xx:xx:xx (where x is a number from 0 to 9 or a letter from A to Z).

Enter the MAC address of the device to allow or deny (depending on the filter mode selected).

Once you have added your or your devices they will be displayed in the filter list.

If an unauthorized device tries to connect to your wireless network, it will be automatically rejected (and even if it has the correct security key).
So avoid putting your MAC address in peripheral refused. ;-) If this is the case, you have 2 options : the network cable or reset button to access again the router or access point Wifi.