The motherboard of each computer has a BIOS (or more recently : a firmware) allowing in particular to manage the booting of your computer, to keep the date and time of the day, ...
Here is a lot of information regarding the BIOS that you had in your old motherboards and the UEFI firmware that you increasingly have when you buy a newer motherboard. You will also see that UEFI provides backward compatibility with the BIOS that you had in the past. 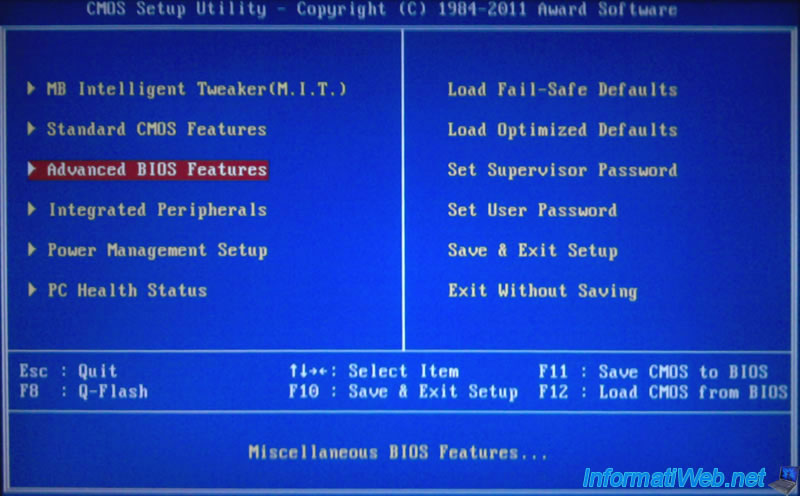 BIOS (Basic Input Output System) is a firmware stored in a read only memory (ROM) chip and which allows you to perform basic operations, such as : booting your computer, recognizing your hard disks, ...

1.2. Settings in the CMOS chip

On your motherboard, there is also a CMOS (Complementary Metal Oxide Semiconductor) chip in which is stored a copy of all the settings available in your BIOS, as well as those that you have changed in the BIOS.
For example : the current date and time, the BIOS boot order, the controller mode to use, ...

Since you can change these settings at any time (usually by pressing the "Del", "Delete" or "F2" key when starting your computer), these can't be stored in read-only memory.
So, you need electricity to keep this data, even if you unplug your computer one day (to move it or to protect it against a thunderstorm, for example).
It's for this reason that you will always find a CR2032 battery of 3V on the motherboard of your computer (stationary or portable).

This battery lasts for years, but it may happen that your computer crashes one day at startup with the "CMOS checksum error" error.
In this case, it means that this battery is empty.

You just need to enter the BIOS and save the changes (even if you don't change anything) to copy the default BIOS settings to the CMOS chip.
Then, be sure to leave your computer plugged into the power outlet while you buy a new 3V CR2032 battery to replace the one on your motherboard.

Before your computer starts up, a test (called "POST" for "Power-On Self Test") is performed.
This test verifies that each component is functional and compatible and can tell you the problem detected via :

If the test is successful, then the BIOS will try to boot on the operating system installed on your computer or on another device (CD/DVD drive, bootable USB key, ...) depending on the boot order you have configured in your BIOS.

Since 2006, UEFI (Unified Extensible Firmware Interface) has appeared.
This firmware replaces the BIOS on recent motherboards and makes it possible to configure the same settings as with an old BIOS.

Generally, if your motherboard has an UEFI firmware, you will have access to a GUI usable with keyboard and mouse as below. 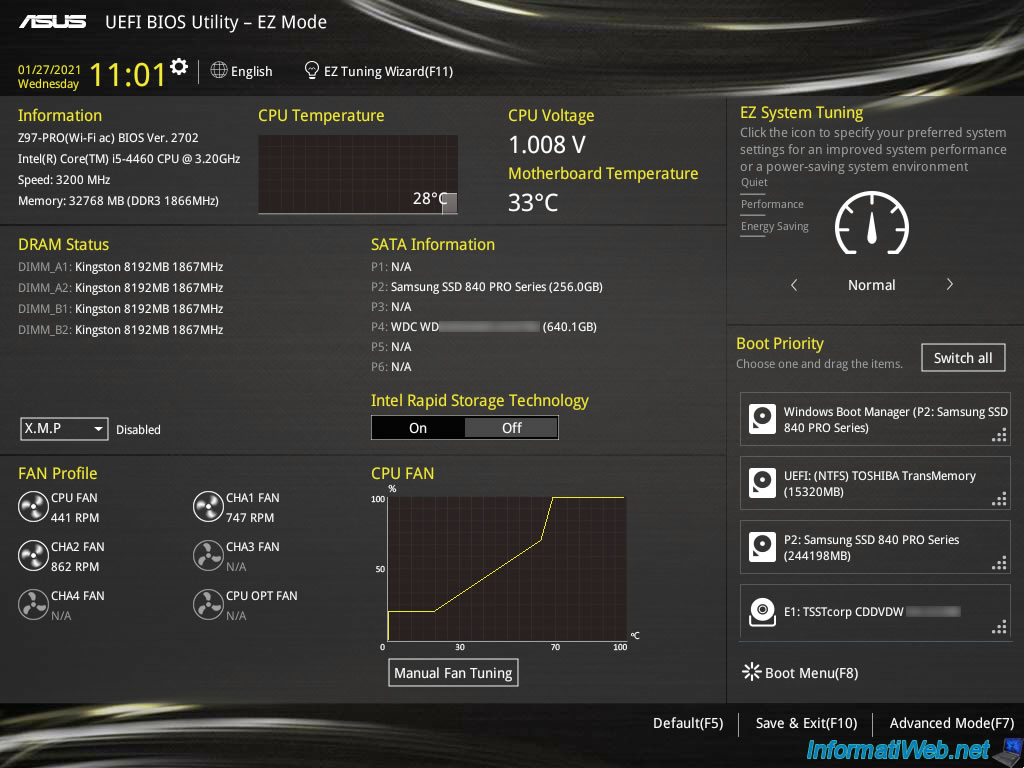 WARNING : to boot on Windows in UEFI mode, you will need to install the 64-bit (x64) version (architecture) of Windows. The 32-bit (x86) architecture is not supported by UEFI.

When you have an UEFI firmware, your computer can only boot on UEFI (or EFI) compatible systems. This is the case with Windows 7 and later, some live CDs based on Windows PE, ...
However, if your computer is configured to boot exclusively in UEFI mode, it will not be able to boot on old operating systems or old live CDs like : Hiren's Boot CD, Ultimate Boot CD, ...

To overcome this problem, manufacturers have integrated a feature to boot in BIOS LEGACY mode (old BIOS) from their UEFI firmware. Depending on the BIOS, this option is often called "CSM", "Compatibility Support Module", "Legacy OpROM", ...

It's thus possible to install Windows in UEFI mode on your internal hard drive, while keeping the possibility of booting on live CDs such as : Hiren's Boot CD, Ultimate Boot CD, ... thanks to this compatibility mode (CSM / LEGACY BIOS).

Important : if you have installed Windows in UEFI mode and you have enabled secure boot in the BIOS of your motherboard, enabling this "CSM" (or "LEGACY BIOS") feature will constitute a security vulnerability since your computer may boot to a malicious system in "LEGACY BIOS" mode.
However, it's still practical if you use it temporarily while repairing your computer, for example.