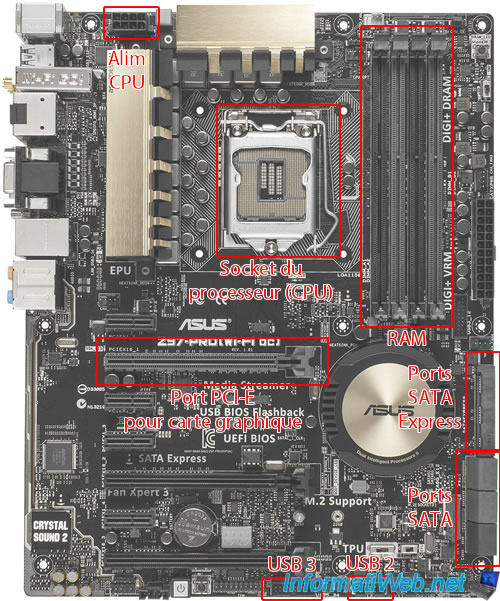 Choosing your motherboard is very important because everything goes through it. The hard drives, RAM sticks, the processor, graphics cards, ...

As mentioned in the introduction, there is different product lines available : the high range (usually more expensive than the others but more efficient and more complete), the middle range and low range.

Of course, these brands also provide high-end motherboards, and low-end but Asus is known for providing professional motherboard (high-end). And our experience allows us to confirm this statement.

For our own professional configuration, we chose the motherboard "ASUS Z97-PRO WI-FI AC" because she has several interesting features from Asus :
- The "CrashFree BIOS 3" feature : allows you to restore the BIOS even if an error occurs during the update (flash) of it. Without this feature, an error that would occur during the BIOS flash, render the motherboard permanently inoperable.
- The "BIOS Flashback" feature: allows you to update your motherboard BIOS without using a processor. So, you can try to support your new processor by making a BIOS update using this feature.
- The "MemOK!" feature : To automatically change the BIOS settings to make your RAM sticks compatible with your motherboard. The success rate is not 100%, but in general, it works. This feature is useful when the red LED lights up next to this button. In this case, the supply of your computer starts but the screen will not display anything because of the incompatibility detected with your RAM sticks.
- The "ASUS Q-Code" feature : that displays the "POST" codes on the small "screen" at the bottom of this motherboard. When your computer doesn't start, simply refer to this code to find the cause of the problem.
- The "ASUS Q-LED" : which allows you to know what is the component that has a problem, due to red LEDs that light up for a particular component that has a problem. (CPU, DRAM, VGA, Boot Device LED)
- Etc.

First, check that the desired motherboard is compatible with your processor and your RAM sticks :
- For the processor :
1) Choose a processor manufacturer : Intel or AMD
2) Next, check the socket number (usually 1150, 1155, 1156, 2011, ...) and check the compatibility of your processor on the motherboard manufacturer's website. Example : For Asus, select your motherboard, then go to : Support -> CPU Support.
- For RAM sticks : Check the version (DDR2, DDR3, DDR4, ...), frequency (1333, ..., 3200 MHz) and the maximum usable amount (eg 32 GB) by going to the same website. For Asus, this information can be found in the features of the motherboard.

Connectors available on the motherboard must also orient yourself to a particular model :

To choose a processor, you must choose between the two famous manufacturers :
- Intel
- AMD

In general rule, Intel processors are the most used and best known than AMD processors but each has his favorite brand. I personally prefer Intel but it's just because I've always had Intel CPUs and I am totally satisfied. By mounting computers in a computer store for 3 months, I noticed that computers with an AMD processor had more time for the startup screen is displayed (which is a problem when troubleshooting the computer) . But, at the performance level, maybe that AMD processors are same performance as Intel. I never took the time to compare them.

At the moment, the most popular Intel processors :

First, you can know the chipsets compatible with your processor, by going on the sheet of the Intel CPU and then clicking "Compatible Products" in the left menu. Then, also check on the motherboard manufacturer's website to be sure that the processor is also supported on their side (theoretically "yes" but we are never be too careful).

Not being an expert for the AMD brand, here is some information based on tests performed by hardware testing specialists :

Informations base on the test : "Choose your processor, processors comparison".