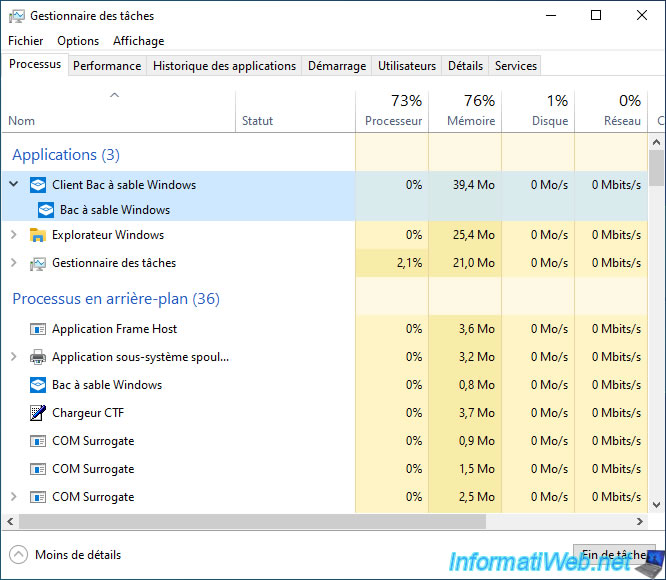 If you go a little further down, you will also find the "Vmmem.exe" process which tends to be resource intensive.
Indeed, it's the instance of the virtual desktop on Windows 10 or 11 Enterprise. 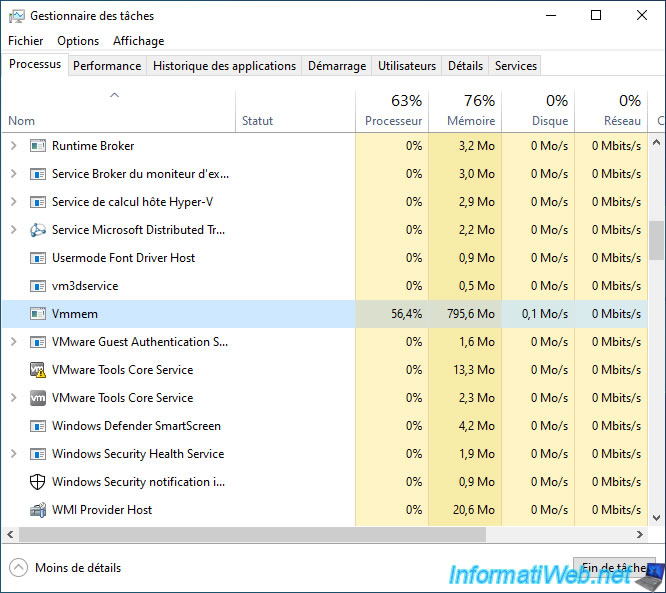 When the Windows Sandbox is open, this is what the task manager looks like on our physical computer. 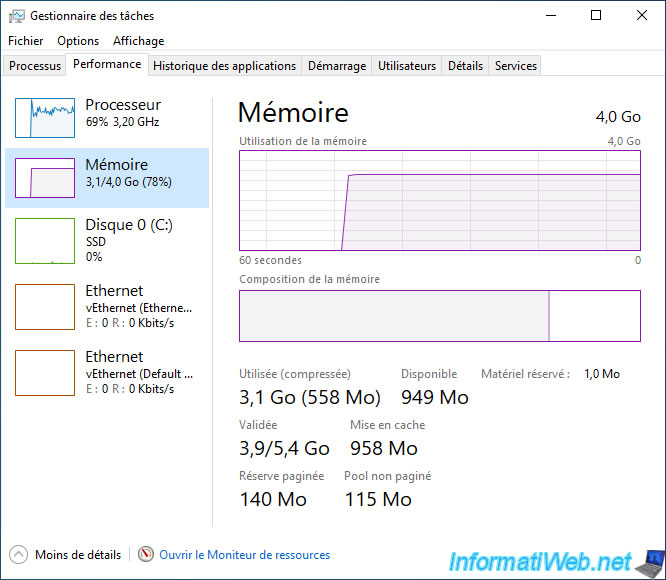 And here's what happens when it's closed.

However, be aware that the system resources (CPU / RAM) are shared between the Windows 10 and 11 installed on your physical computer and the one running in the virtual desktop (Windows Sandbox). 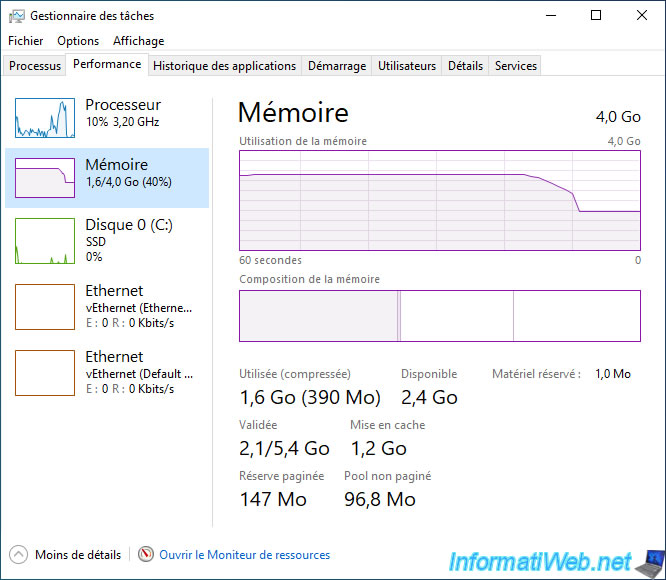 Thanks to this configuration file, you will be able to :

On the Microsoft site, you will find a script to access the "Public Downloads" folder of your physical computer from the Windows 10 or 11 installed in the Windows sandbox.

Here are some explanations :

Paste this script in Notepad (for example). 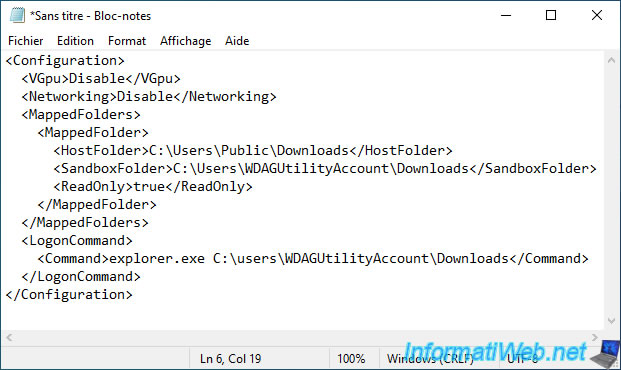 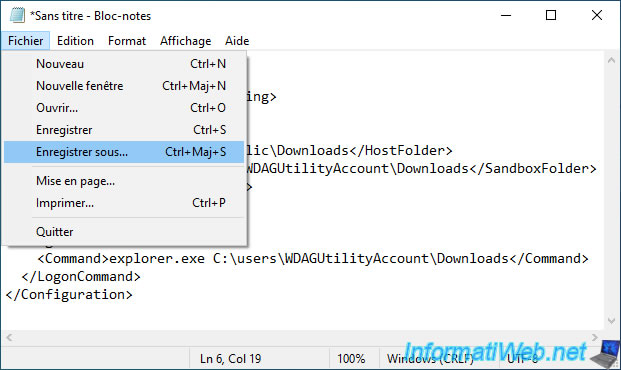 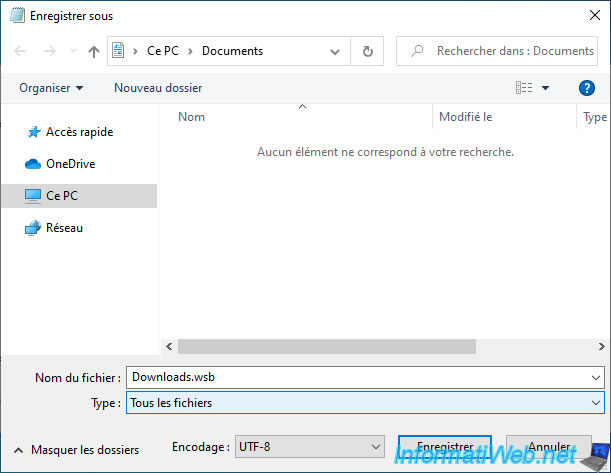 In the "Public Downloads" folder of our physical computer, we have created a "test file.txt" file.

As you can see, scripts with the ".wsb" extension are recognized automatically by the Windows Sandbox and therefore have a blue and white icon as below.
Double click on it to launch the sandbox with this configuration file.

Once the sandbox is open, you will see that the file explorer will automatically open in the Windows sandbox and that its contents will be that of the "Public Downloads" folder of the physical computer. 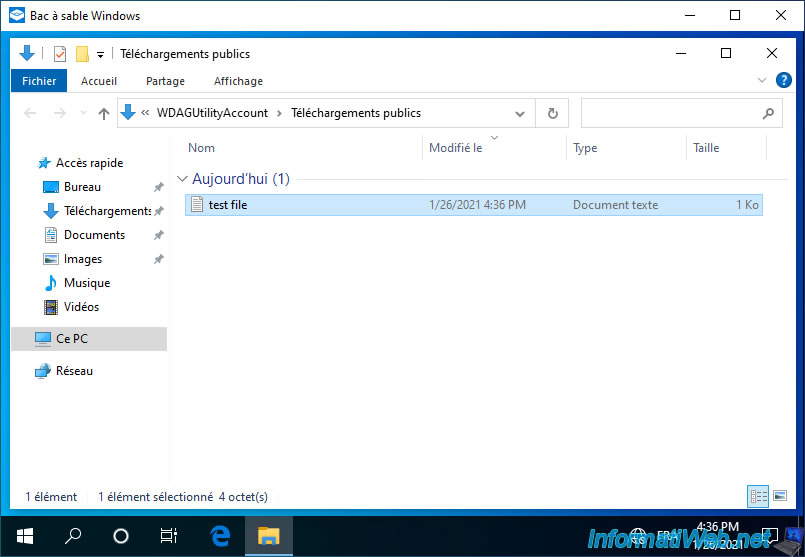 For the "WDAGUtilityAccount" user, you can easily see that this is the user you are automatically logged in as in the Windows sandbox. 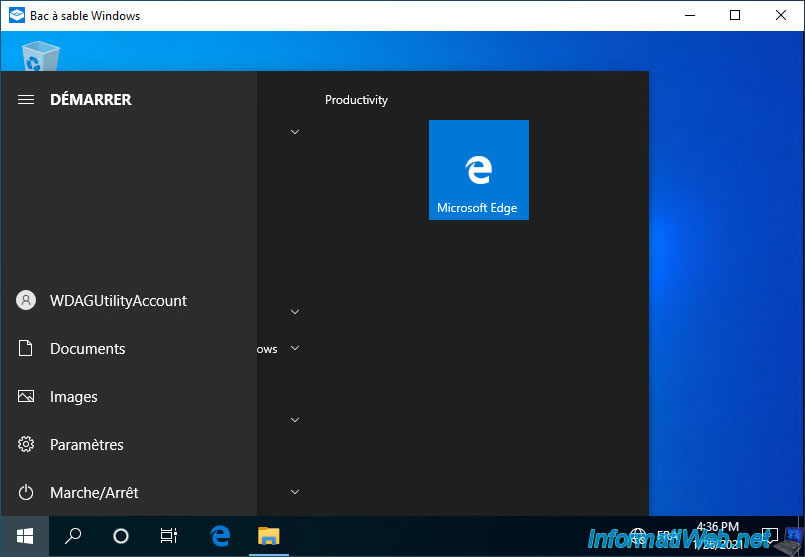 5.1. Windows Sandbox image based on the copy of Windows already installed

Unlike a typical virtual machine, the sandbox doesn't use a separate disk image (virtual hard disk), but is based on the image of Windows installed on your computer.

Indeed, as Microsoft indicates in its official documentation, some Windows files are immutable (= don't change) and can therefore be shared with the Windows Sandbox.
This immutable part of Windows is shown in green in the image below.

For the other part, shown in yellow on the image below, it's the mutable part (= which changes). For these mutable files, Windows therefore has a copy of these files to be able to use them in this Windows Sandbox.
This part of Windows weighs 30 MB in compressed version on your computer and weighs 500 MB once it's unzipped (when you install Windows Sandbox on your computer on Windows 10 or 11).

This greatly reduces the disk space required to store the sandbox on your computer and eliminates the need to download a complete copy of Windows, as would be the case with a classic virtual machine.

Unlike a virtualization solution where you often allocate a fixed amount of RAM, you don't need to manage the RAM allocation for it as the resources are shared transparently between the host and the Windows sandbox.
This is due in part to the fact that the sandbox functions as a container and not as a virtual machine that would be completely independent of the host system.

Without going into too much detail, the data (processes, currently open documents, ...) temporarily stored in the random access memory (RAM) of your computer are stored in what are called pages (which you can compare to boxes if you wish it).

Since the RAM of a virtual machine is isolated from the physical computer (host), if you open the same file in the host computer and in the virtual machine, this file will be stored in 2 different places of the RAM (as you can see on the left side of the diagram below).

With a virtual machine, the Windows hypervisor manages the scheduling of the virtual processors for that virtual machine.
For the Windows sandbox, a technology called "Integrated Scheduling" allows the host to decide when the sandbox will get its CPU cycles.

This makes it possible to manage the virtual processors as host threads and thus to better manage the priority of the different processes (whether they are running on the host computer or in the Windows sandbox).

Thanks to its partners, Microsoft can integrate modern graphics virtualization features into Microsoft DirectX and WDDM (Windows Display Driver Model).
This allows you to get a smooth user experience and launch graphics-intensive applications smoothly.

For this to work correctly, your graphics and graphics driver must be compatible with WDDM 2.5 or later.
Otherwise, the sandbox will use Windows Advanced Rasterization Platform (WARP).