As you probably know, the Internet is a goldmine, but there will always be people with bad intentions to use the of programs vulnerabilities that we use every day, to spread viruses, malware, spy our private life, ...

In short, in this full article, we will explain how to :

1. Install an antivirus or an Internet Security solution

Everyone says it you must always install an antivirus. It was and it still true, but antivirus they are a little outdated now.
That said, you must still install one to block known viruses and those that are not yet known, thanks to heuristic detections.
In summary, the antivirus analyze the program behavior and detect it as viruses or not depending on a complicated algorithm.
Example : an image editing software that alters system files, sensitive registry keys, and sending lots of data over the network to an IP address located in the eastern countries is very suspect.

In short, for the installation of an antivirus, you have 2 options :

For the choice of a free antivirus, everyone will recommend Avast Free or Avira.
Personally, we recommend you to install Avast Free, because it is one of the best antivirus and he also has other security features.

For Avira, it's a good antivirus, but too classic. 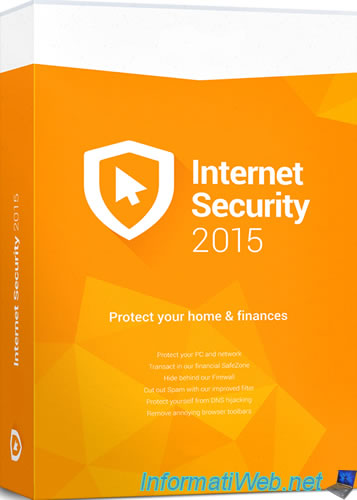 If you opt for an Internet Security solution that will be paid, many will recommend Bitdefender.
Indeed, Bitdefender is often recommended when a person wishes to buy an antivirus.
Nevertheless, I had the unpleasant surprise to see that Bitdefender created conflict with Google Chrome. Moreover, according to several topics present on the forum Bitdenfender, this kind of problem would not be new.
So, I went back to Avast and I opted for Avast Internet Security. Avast Free would have sufficed, but because we spend a lot of time on the computer, the investment was worth it. 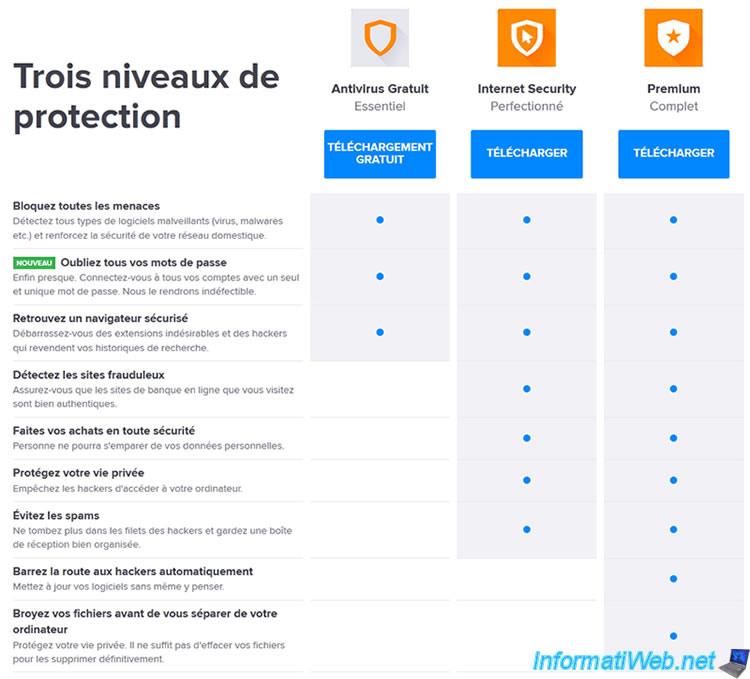 With the evolution of technology and the passing of time, hackers are also more efficient, but other IT security companies have emerged.
I refer to the famous company "Malwarebytes" and its antimalware "Malwarebytes Anti-Malware".

Indeed, Malwarebytes Anti-Malware is a powerful anti-malware and Malwarebytes closely following the new threats that appear on the Internet.
Both on social networks, than on the known and less known sites.

Malwarebytes Anti-Malware is available in 2 versions :

The difference between the two versions is the real-time protection.
Indeed, Malwarebytes Anti-Malware Free currently offers to scan your computer for malware, rootkits, ... on your computer.

In addition to this on-demand scan, Malwarebytes Anti-Malware Premium offers a real-time protection against :

Often ignored by users, security vulnerabilities exist in many programs, including the best known : Internet Explorer, Mozilla Firefox, Google Chrome, Microsoft Edge (since Win. 10), ...
That said, plugins are also programs to be used by other programs. Including : Java, Adobe Flash Player, ...

Indeed, Malwarebytes Anti-Exploit is an anti-exploits software that allow you to protect you against security vulnerability present in programs that you use.

Finally, this program requires no configuration. Install it and forget it.

Malwarebytes Anti-Exploit is available in 2 versions :

The difference between these two programs can be found at the proposed shields.
Indeed, Malwarebytes Anti-Exploit Free protects you only against security vulnerabilities in your web browsers (Firefox, Chrome, IE, ...), and in plugins (Java, Flash, ...) they use.
So, if you go to a site that attempts to make you download a virus using a flaw in your browser or of a plugin installed on your computer, Malwarebytes Anti-Exploit detect this abnormal behavior and block the use of this flaw.

In addition to the protection of web browsers and their plugins, Malwarebytes Anti-Exploit Premium also offers shields for : 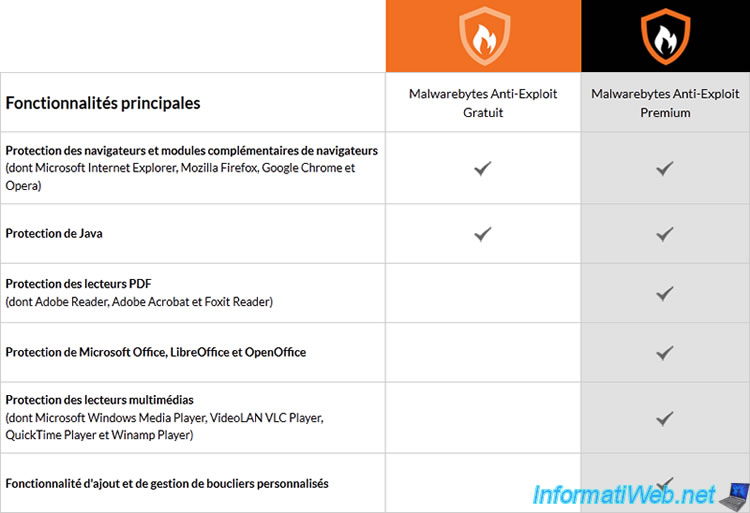 Finally, here is a video created by Malwarebytes which will show you an attack received by visiting a single website.
Near the end of this video, Malwarebytes also show you that Malwarebytes Anti-Exploit will be able to block this attack without any intervention on your part.
In this video in English, you will see this at the time displayed beginning of the line (values x:xx) :

Hoping this video (with our explanations about this video) has allowed you to understand :

4. Stop the propagation of viruses over USB keys

Indeed, USB supports (including USB keys) are an opportunity to spread viruses, because it's possible to run automatically a virus at the connection of the USB key or at the inserting of the CD into the infected computer.
To block this vulnerability, simply block the creation of the "autorun.inf" file on USB keys and disable autorun on your computer.

For this, simply install Panda USB Vaccine and immunize your PC and USB keys as explained in our tutorial : Prevent the spread of viruses by USB media