On Windows 11, 10, 8.1, 8 and 7, there is a hidden feature called "Hosted Wireless Network" (or "Virtual Wifi") which allows you to create a Wifi network using any compatible Wifi network adapter (even if it's an USB Wifi key).

To check if the driver of your Wifi network adapter is compatible with this feature, open a command prompt (cmd.exe) as administrator and use the following command :

This command will show you informations about the Wifi drivers installed on your computer :

In the displayed results, locate this line :

To create the wireless (Wifi) network hosted on your computer, use this command.

If your network card supports this feature, this will be displayed :

Warning : if you have just installed the driver for your wireless (Wifi) network adapter, a restart may be necessary for this command to work in your case.

If your computer doesn't have a wireless (Wifi) network card or its driver is not installed, this will be displayed :

For the moment, we have only configured the settings of the hosted wireless network (Wifi).
However, in order for it to be visible to other devices (computers, smartphones, game consoles, tablets, ...), you must first start the associated service.
To do this, in the command prompt as administrator, type this :

This message will appear :

Once the hosted wireless (Wifi) network has been started, you can display informations about it using the command :

With this command, you will be able to see :

WARNING : this wireless (Wifi) hosted network stops when Windows is shut down and doesn't restart automatically.
Its configuration is obviously not lost, but you will have to restart it manually each time you want to make your wireless (Wifi) hosted network available.
You can also create a shortcut and a scheduled task in Windows to start it automatically every time you start Windows.

If you want to manually shut down the hosted wireless (Wifi) network, you need to use this command :

5. Automatically start the wireless (Wifi) hosted network when the computer starts up

As previously indicated, this wireless (WiFi) hosted network automatically shuts down when Windows shuts down and doesn't automatically start when the computer starts up.
However, you only need to create a scheduled task if you want to start it automatically each time you start your computer. 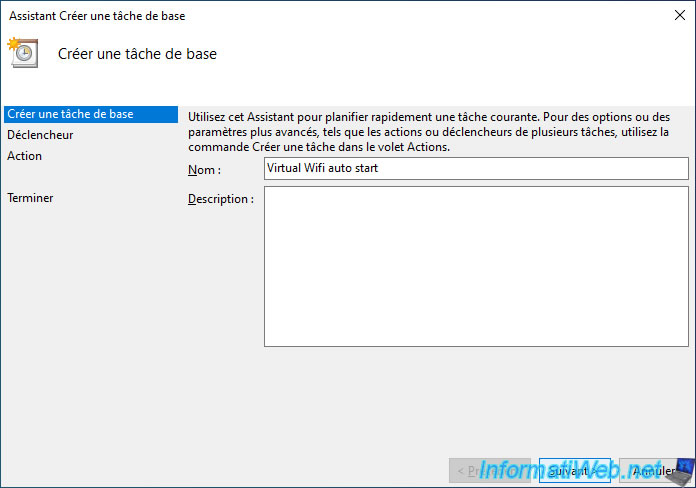 Choose the "When the computer starts" trigger.

Thus, the hosted wireless (Wifi) network will start automatically when Windows starts up and it will not be necessary to open a session on your computer for it to start. 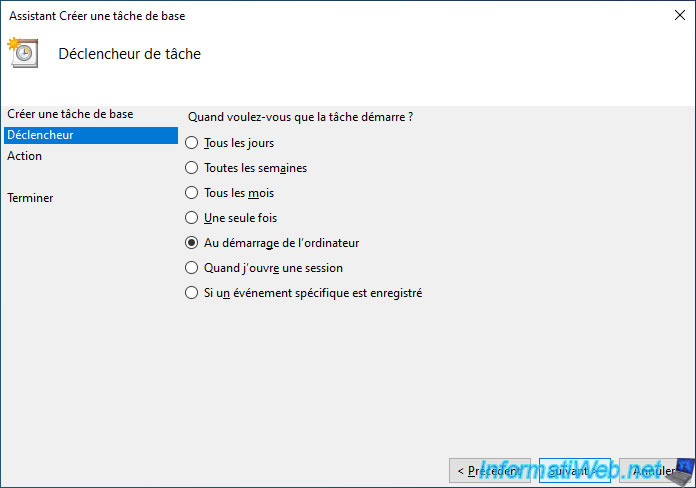 Choose the "Start a program" action. 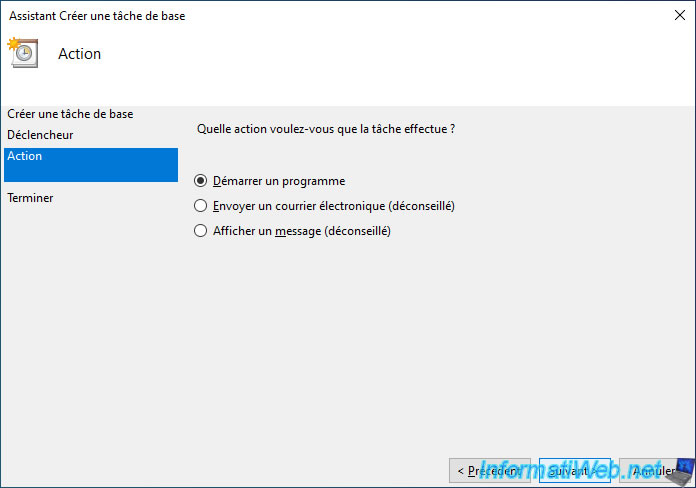 To launch this command from a scheduled task, all you have to do is specify : 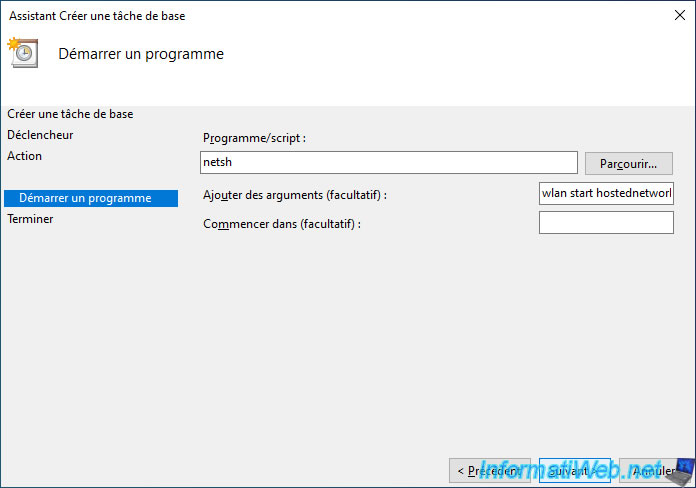 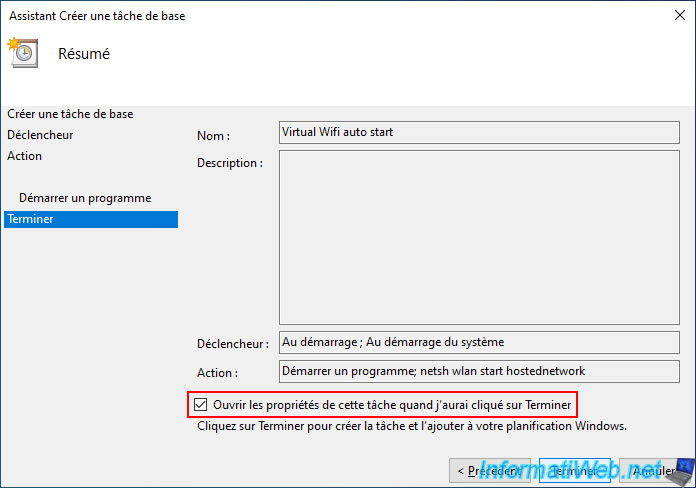 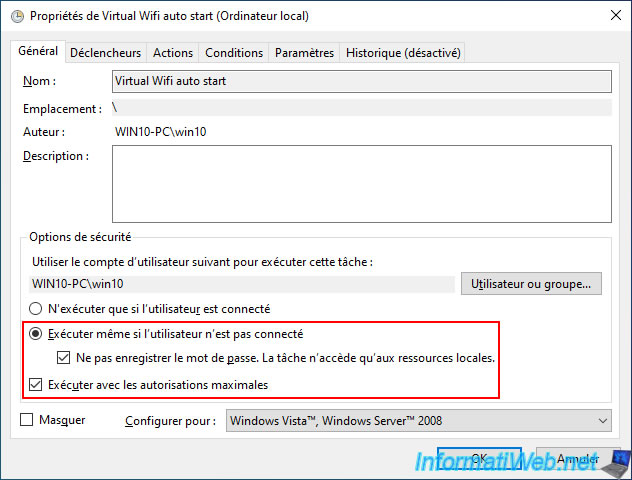 In the "Conditions" tab, uncheck the "Start the task only if the computer is on AC power" box to be sure that this task can be executed, even on your laptop PC (if applicable). 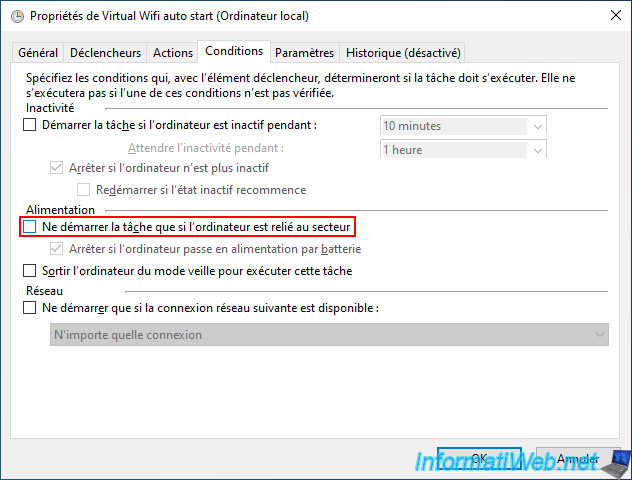 In the "Settings" tab, uncheck the "Stop the task if it runs longer than: 3 days" box so that the task can start each time you start your computer. 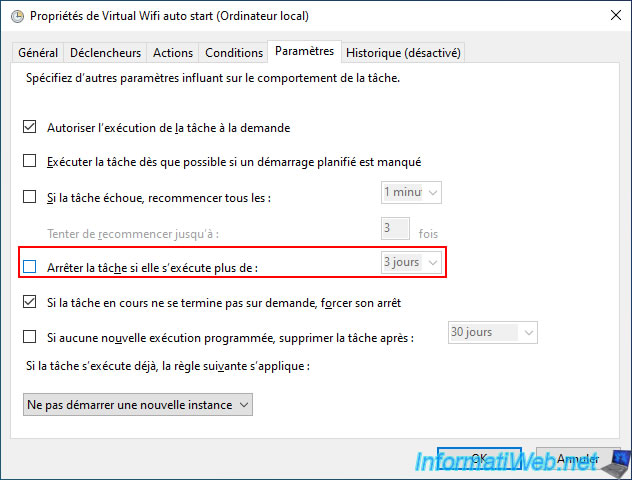 The task is created.
Restart your computer and you will see that the Wifi network will be available despite shutting down and restarting Windows. 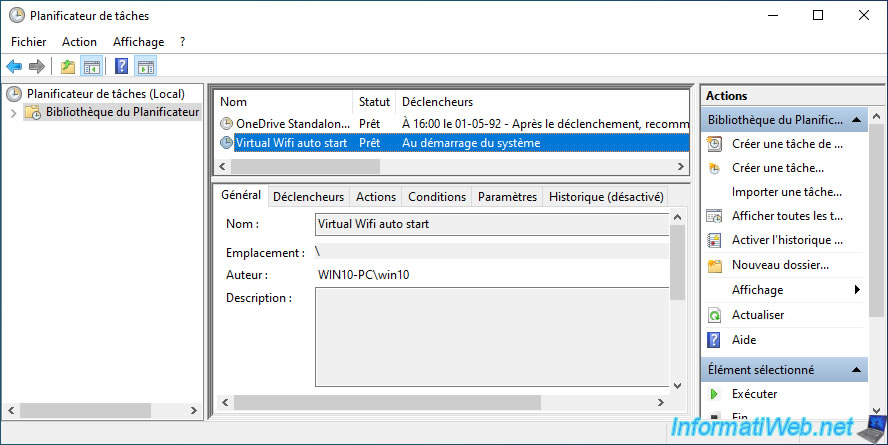